Christopher Strong tells the story of a happily-married politician who falls in love with a famous flier, jeopardising his marriage and the happiness of all those around him. The title character is played by Colin Clive while Katharine Hepburn is Lady Cynthia Darrington, the woman who catches his eye in one of her earliest films. Lady Strong is played by Billie Burke while their daughter, Monica, is played by Helen Chandler. Rounding out the main cast is Ralph Forbes as Monica's married boyfriend Harry.

Perhaps the most difficult aspect of this film for me was understanding what Lady Cynthia saw in Sir Christopher Strong. His attraction to her is understandable but there is little about her feelings until later in the film. Arguably, Lady Cynthia is the most important character and deserves to be the title character. She is a record-breaking aviator who is very good at what she does. While Strong is a successful politician, yes, she seems above him in all senses of the word.

The supporting cast is good, especially Billie Burke. Intriguingly enough, the film doesn't dwell on the potential ramifications of Lady Strong finding out about the affair. She finds out fairly rapidly and her quiet reaction is heartbreaking to watch, along with a subsequent scene where she finds her husband listening desperately for news of Lady Cynthia's latest flight on the radio. Burke doesn't overplay these scenes when it would be very easy to do so and she shines all the better for it.

Unfortunately, parts of the dialogue melt into over-the-top declarations of feelings. Thankfully, these don't ruin the entire film but they do spoil parts of it. The best scenes for me are not the Hepburn/Clive ones but the ones where other people - Lady Strong, Monica - are involved.

The ending, though perhaps predictable, is well worth sticking around for. The montage scene of memories that Lady Cynthia dwells on during a flight is fairly innovative and effective for 1933. As one of Katharine Hepburn's early films, it signals the promise of what's to come and, if you ignore certain aspects, it's a very good analysis of infidelity, propriety and society. It also contains an attempt at a bedroom scene between the lovers - nobody is seen but the intention is very evident. Again, not bad for 1933. 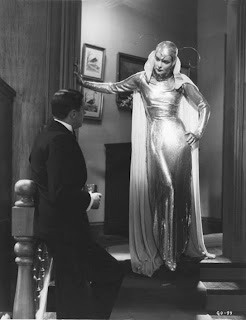