It probably hasn't escaped your notice than I'm no longer here. That's because I've decided to self-publish my novels and am now blogging over on my new website. If you're interested in reading, please visit www.kiteyre.co.uk. You can also sign up for updates and be one of the first to find out when my debut novel is available to buy.

Thanks for reading over the years.

Here's to the next step in my journey.

Posted by CharmedLassie at 09:12 2 comments:

Book Review: Death of an Avid Reader by Frances Brody

Death of an Avid Reader is the sixth novel in the Kate Shackleton private detective series (the previous five have all been reviewed on this blog). It's set in 1920s Yorkshire and has become one of my favourite book series ever.

This novel straddles two investigations. Kate is originally tasked to track down the illegitimate daughter of Lady Coulton and throws herself into that investigation with the aid of her partner Jim Sykes. However, she is also plunged into a murder mystery when Dr Horatio Potter is found dead in the basement of the Leeds Library following an exorcism.

This was another thoroughly enjoyable read from Brody, with plenty of twists and turns along the way. I particularly liked the involvement of a Capuchin monkey and the way the story revolved around the library. It is pretty much like heaven for me to read a murder mystery set in a library, especially given how things wrapped up. There were some interesting tangents but, unlike some mysteries, the whole thing fit together very nicely in the end. The character introduced were necessary for the plot and they were well written - as usual.

Without ruining the various plot twist there's not much more I dare say about the novel. I will say, though, that the scenes involving the monkey were some of the most memorable. I just wish she'd kept Percy at the end of it all!

Posted by CharmedLassie at 08:46 No comments:

Set in the claustrophobic world of 1980s Oxford, Daughters of Jerusalem tells the story of the Lux family and the façade of respectability that crumbles through the course of the novel. It's an hilarious and dark novel that perfectly captures the bitterness of life with vivid characters who jump from the page.

Chief amongst these is the eldest daughter, Eve, who loathes her younger sister with a passion. Phoebe is spoiled and always gets whatever she wants whilst intelligent Eve feels sidelined. As the novel progresses this loathing takes a more sinister turn and Phoebe's machinations against her sister have dire consequences. Mendelson's portrayal of Phoebe's selfishness is exquisite, especially because we've all encountered someone like that in our lives.

Jean Lux's attention to her daughters is diminished by the desire for some excitement in her boring life. Her husband is far more interested in a Lectureship that's threatened by the arrival of an old enemy and her friend, Helena, has a bombshell to drop about the nature of their relationship that impacts the whole family. I really enjoyed the development of that storyline and how it fit into the claustrophobic environment.

Ultimately, Daughters of Jerusalem is so enjoyable because it's so real. It melds the academic life with a dysfunctional family life. It doesn't shy away from showing parents with favourites and how this can affect the children. It's a novel about misunderstandings and things being left unsaid. The final chapters manage to bring everything together without tying it all neatly in a bow and there are some truly satisfying moments in the last third that are just reward for reading - even if the entire book wasn't enjoyable in numerous little ways.
Posted by CharmedLassie at 08:55 No comments:

It's been a while since I posted anything on here. I apologise for that - I know you must all be waiting with bated breath... Well, perhaps not, but I apologise nonetheless.

There have been quite a few changes in my life in the last few months. Perhaps the most fundamental of these was that my grandmother died at the end of February. Long-time readers of this blog will recall our stresses moving her from her home to sheltered accommodation to one residential home and, finally, to another. She settled there at least, and the staff were brilliant. When the end came, that plucky old lady survived for a week without food or water, just lying there in her bed listening to Radio 3. She slipped away with one of her best friends by her side and, honestly, it was time. I owe a lot to that little old lady, I really do. I wouldn't have my MA or my PhD if it wasn't for her support, and one of my most vivid memories of recent years is telling her I was now 'Dr Lucy Brown'. That expression of delight will stay with me forever.

Along with Grandma, other things have changed. While I'm still interested in pursuing an academic career at some point, I've come to accept that I'm not ready for that. I need to concentrate on staying healthy and looking after myself. I'm not the first to conclude that academia isn't conducive to that! So what am I doing instead? Well, I've turbo-charged the freelance work I was doing before into something akin to a proper job - with caveats.

I've acquired several ongoing clients who are currently bringing me in a steady income. However, I'm not actively touting for extra work right now. I'm in the very fortunate situation of not needing to bring in a living wage, thanks to living with my father and therefore not having those pesky bills that everyone else has to deal with. This gives me the opportunity to keep my freelance workload manageable and focus on other things as well.

Top of this list is, naturally, my fiction. Expect an update on my projected timetables over the next few weeks but I'm cracking on with the 12 (!) novel drafts in various stages of completion and rewriting that I've got in the bank. They're not going anywhere till I'm happy with them and, fortunately, the freelance work gives me the chance to continue working on them properly.

I'm on a good path at the moment and there are other things in the pipeline too. Let's see how it plays out, shall we? 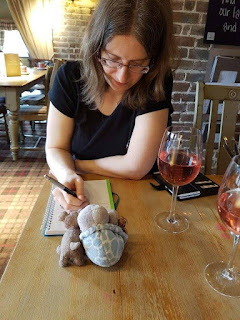 Posted by CharmedLassie at 10:25 2 comments:

As I reported last year, I was short-listed in the 2015 Exeter Story Prize. I'm now pleased to tell you that my story, 'Pongo', has been published in their anthology of winning and short-listed entries.

'Pongo' is a bit of a dark story. It takes place on Boxing Day at a fairground but it isn't one of those typically fluffy Christmas stories. I'm quite proud of it and I hope some of you will get the opportunity to read it. When I have success with a short story featuring lesbian characters I'm honestly delighted. That's the bread and butter of my work and I'm grateful it's reaching a general audience as well.

You can buy the anthology from Amazon here.

In addition, please check out Creative Writing Matters who host these annual competitions. They do a lot of good work with writers and are a lovely bunch. 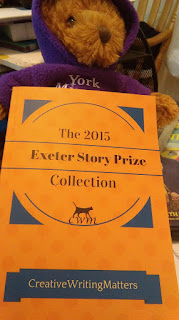 Posted by CharmedLassie at 12:37 No comments:

At the end of last year I was delighted to be awarded third prize in the Fabula Press Aestas 2015 competition. My story has now been published as part of their winners' anthology and is available to buy online for just £5.99.

'Dear Violet' is a story that came to me when I heard about a postbox that hadn't been emptied for years and started wondering about what kind of letters could've languished in there. I received some fantastic feedback from the judges and it's really been a pleasure working with the editor getting this story ready for publication so thank you to Fabula Press for that. I haven't had chance to read the other stories yet but there are some interesting titles in there and I'm sure it's going to be excellent.

You can buy the anthology from Amazon here. 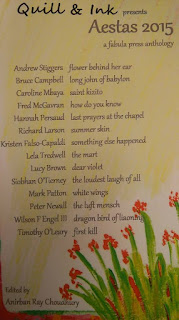 Posted by CharmedLassie at 19:09 No comments:

Book Review: Wild at Heart: A Life by Suzanne Rodriguez

Natalie Clifford Barney was at the centre of decadent Paris in the opening decades of the 20th century. In this biography, Rodriguez examines the life of a controversial woman, famed more for her scandalous affairs with women and her literary salon than her own literary pursuits.

Barney is one of those subjects it's difficult to like. Rodriquez doesn't flinch away from examining her flighty nature and the selfishness that permeates the book is a bit overwhelming at times. However, it's balanced out by her generous acts and determination to help fellow writers in various ways. It creates something of a contradictory human being and that, of course, rings completely true.

Born into a life of privilege, Natalie Clifford Barney defied expectations by refusing to settle down and marry. Instead, she embarked on a series of intense love affairs with women from an early age. She didn't believe in fidelity, though, which caused problems with some of her more important relationships, In truth, it becomes a bit dizzying and her treatment of some of her partners doesn't portray her in a positive light.

It's easier to be impressed by her literary salon and the spasmodic efforts she put in to championing various writers and artists. The names peppered within this book read like a who's-who of the 20th century artistic scene with Ezra Pound, Rainer Maria Rilke and Ford Madoz Ford popping up. One of the most laudable of Barney's endeavours was to host nights specifically for celebrating women such as Gertrude Stein and Anna Wickham, one of the first attempts to draw attention to the achievements of women when men were getting most of the glory. The most amusing anecdote in the book comes via the retelling of Barney's single, disastrous meeting with Marcel Proust. It's worth reading just for that.

Barney's lack of application to her own literary talents is frustrating. Editing wasn't something she was interested in, meaning that her potential was never fulfilled. For me, anyway, this was one of the things that annoyed me about her and I was left wondering what could've been if she'd been forced to write to earn her living. However, that would've negated a lot of what made Natalie Clifford Barney who she was.

In the end, Rodriguez manages an intimate yet unflinching portrait of a flawed woman of privilege. The portrayals of American high society and Parisian life are evocative of a lost age and, overall, this is an excellent biography of a woman who, nevertheless, I couldn't bring myself to like.
Posted by CharmedLassie at 10:18 1 comment: