The Devil and Miss Jones stars Charles Coburn as reclusive tycoon Mr Merrick who is appalled when an effigy of him is hung outside a department store he owns. Determined to bring the culprits to justice, he goes undercover as a slipper salesman in the store. Once there, he finds himself taken under Miss Mary Jones's (Jean Arthur) wing, who feels sorry for the hungry and helpless man she sees. Fellow colleague Elizabeth (Spring Byington) takes a different kind of shine to him. But of most importance to Merrick is Joe (Robert Cummings), the ringleader of the trouble - and Mary's boyfriend. Will Merrick press ahead with his plan to blacklist them all or will experiencing things from the other side of the fence change things for him? S.Z. Sakall and Edmund Gwenn also have supporting roles.

This is a fantastic film. It gets the tone just right, from Merrick's first intimidating scene interrogating his employees to being interrogated himself by his new manager at the store. Coburn is wonderful, bouncing off all the other actors without exception. Jean Arthur is also excellent, particularly in the scene where she's trying to club Merrick over the head with a boot. There are some excellent scenes including when Merrick asks his butler (Sakall) to bring in a girl to make a purchase in order to make him look good - but she won't play nicely. The Coney Island outing scenes are also excellent, particularly when Merrick gets himself accidentally arrested.

Merrick's romance with Elizabeth works very well and Mary does a good job of explaining what she likes about Joe in a memorable scene with Merrick on the beach. In fact, I can't think of a bad scene in this one. My only gripe, if I'm to have one, is that there was no scene between the revelation and the finale - it could've done with one just to iron out the tensions between Merrick and Elizabeth/Mary/Joe.

All in all, this was a thoroughly enjoyable comedy that works perfectly. With arguments about the rich having no concept of reality and advocating workers' rights, The Devil and Miss Jones is probably as relevant today as it was in 1941. 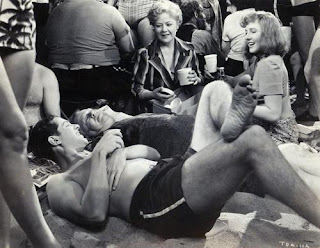