Bedlam stars Boris Karloff as Master George Sims, fictional ruler of the famous Bedlam hospital in the eighteenth century. Nell Bowen (Anna Lee) becomes interested in raising money to improve the conditions at the hospital after seeing inside. However, Sims doesn't want her to disrupt his profitable and enjoyable system of control and mistreatment. He has her committed to Bedlam where she tries to alter things from the inside while her Quaker friend (Richard Fraser) and Whig politician friend (Leyland Hodgson) try to free her.

Aside from a few moments in the middle, this film wasn't as dark as I expected it to be. Much of the preamble takes place outside of Bedlam and focuses on Nell's interactions with Sims, her benefactor (Billy House) and her two friends. By the time she actually ends up in Bedlam there isn't as much tension associated with the prospect as I thought there should be. However, some of the scenes once she's inside more than make up for the lengthy preamble as she faces her fears and steadfastly opposes Sims.

Karloff puts in an impressive, occasionally subtle, performance as Sims, particularly engaging in his early scenes when he's putting on a mask of congeniality. Richard Fraser is perhaps too stern as the Quaker - although that is essentially his character trait - but Billy House as Lord Mortimer is enjoyable, infuriating and sometimes just odd. Special mentions must also go to Glen Vernon as the gilded boy, a very small part that was utterly enthralling, and Vic Holbrook as Tom.

And what of Anna Lee? At time during the opening and middle I found the character a little too upright, as though Lee was trying too hard to be aloof. As the character mellowed, so did the performance and I warmed to the character as the film went on.

Bedlam has several layers to it, depicting a few characters with tantalising backstories I wished were covered in more detail. While it isn't a spectacular film, it has a quiet intensity to it which builds throughout. Sims fate is one that I think will linger with me for a while and that's down to the power of Karloff's face. Worth a watch for the 'battle' scenes between Karloff and Lee alone. 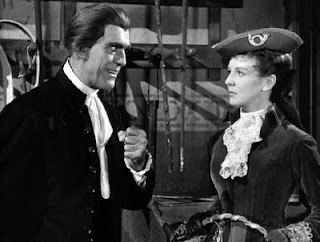