The Bride Walks Out stars Barbara Stanwyck as newly-wed Carolyn Martin. Despite knowing his views on women and work, Carolyn marries Michael's Martin (Gene Raymond) in a very hurried ceremony and settles down to live on his $35 a week. She met a handsome playboy, Hugh McKenzie (Robert Young) in court on her wedding day (don't ask) and he begins to fall for her. When Carolyn finally realises that they can't survive on Michael's wage, she is forced to secretly get a job, which may spell the end of her marriage. The supporting cast includes Ned Sparks and Helen Broderick as Paul and Mattie Dodson and Hattie McDaniel as Mamie.

The 'family values' in this film are a little hard to stomach for a modern viewer. It's not so much Michael's desire that his wife shouldn't work but his pig-headedness when it turns out she has to. As a consequence, he's not a very sympathetic character at all and I found myself rooting for Hugh McKenzie instead. Not because he was rich and could give Carolyn everything she wanted from life but because he listened to her and seemed to derive happiness from her happiness. Of course, the resolution depends on a Carolyn/Michael reconciliation, one that feels completely out of place. Domestic bliss gone awry stories can work but this was too run of the mill with a boring and stubborn husband. The thing that really frustrated me was the scene at the very beginning where Carolyn and Michael argue about their potential life together before they get married. At this point Carolyn seems like a sensible person but she marries him anyway!

Barbara Stanwyck did a reasonable job with a thin character, though her scenes with Robert Young and Helen Broderick were much more preferable to her scenes with Gene Raymond. They really didn't fit together as a couple at all and Raymond couldn't inject much sympathy into what is essentially a stupid character. Ned Sparks provided decent comic relief but, to be honest, my favourite performance was from Robert Young. However unrealistic his drunk scenes were, I enjoyed them and the film only ignited when he was on screen. The furniture repossession scene - where everyone gets drunk - is probably the funniest of the film, if only for Helen Broderick laid on top of a piano. 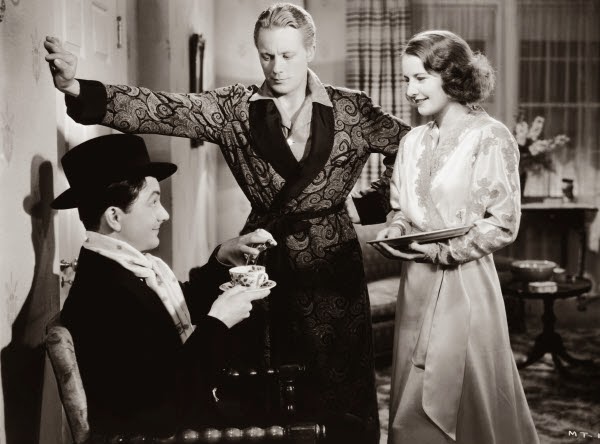