Based on a book by Ann Cleeves, Shetland follows DI Jimmy Perez (Douglas Henshall) and his team as they investigate a murder on one of the islands. The murder is tricky - the victim is an elderly woman who was lured outside and shot but the team can't ascribe a motive at first. She had nothing to steal and no one could really have wanted her dead. The answer may be in the past and the results of an archaeological dig on her land could prove pivotal.

I've read mixed reviews about this, mainly from locals disgruntled at accent representation and light patterns etc. All important in the representation of the islands, I admit, but they didn't hinder the actual drama elements. It's a slow burn drama, that's for sure. The plot itself is intricate but, while I thought I knew 'who' from fairly early on, the 'why' was slower to emerge. I liked the resolution and I liked the way the pace picked up in the last twenty minutes or so, as it needed to.

The landscape is arguably the main character and the gloomy, windswept hills compliment the murder mystery quite nicely. Equally, the music wasn't intrusive and added to, rather than masking, the drama. This is also the role that Douglas Henshall was made for - the dour Scot with a sense of humour and emotion hidden underneath the surface. His personal situation - he lives with his step-daughter, Cassie (Erin Armstrong), while her real father, Duncan Hunter (Mark Bonnar) lives nearby - is interesting and also contrasts the main narrative of family differences by showing a situation that does work well. Of Perez's colleagues, Alision O'Donnell as DC Alison 'Tosh' MacIntosh stands out the most. Young but pretty bright, her interactions with Perez gave the drama a few much-needed humorous touches.

This has certainly been set up for future episodes and I hope it gets them. While I had a couple of script niggles, I think it worked well as a mystery drama which blends into the environment rather than just being pushed on top of it. Accent and pronunciation gripes from locals aside, I think this was a great advert for Shetland and, hopefully, more episodes in future will add to that. 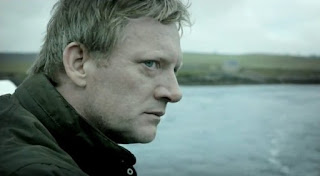