Sunset Boulevard is widely considered to be one of the best films ever made - and rightly so. It tells the story of impoverished screenwriter Joe Gillis (William Holden) who stumbles across what he thinks is an abandoned old Hollywood mansion. However, it turns out that it's occupied by former star Norma Desmond (Gloria Swanson) who lives there with her faithful butler Max (Erich von Stroheim). Gillis is persuaded to stay and help Norma finish her screenplay about Salome but he finds it difficult to handle Norma's moods, suicide attempts and her overwhelming desire for him to love her. Complicating matters is Betty Schaefer (Nancy Olson), an aspiring screenwriter he's met and wants to work with on one of his old projects.

This film is a scathing depiction of how Hollywood uses up stars and discards them, as true today as it was sixty years ago. Swanson is nothing sort of magnificent, particularly as the film goes on and she becomes more and more unstable. Her final scene, much discussed, is one of the most powerful scenes in cinematic history. Throughout the film she is suitably startling, every single gesture and facial expression adding to the character portrayal. Erich von Stroheim is equally as captivating as the faithful Max, his own involvement in the finale being almost as nuanced as Swanson's.

And what of William Holden? It's no secret that I have mixed feelings about him (liked him in Sabrina 1954), detested him in Picnic (1955)) but in this film he was ninety percent excellent. Although I found Gillis a difficult character to like, Holden's portrayal of him was just as it should be. Nancy Olson as his love interest was very refreshing in comparison to the rest of the cast - until she finds out the truth she is an antidote to the machinations of Norma and the bleak atmosphere of the mansion.

There are some truly memorable scenes in this films, scenes which have justifiably found their way into the consciousness of classic film fans. The most famous of these is undoubtedly the final one - the staircase scene already mentioned - but others include the bizarre New Year's Eve party where Norma and Gillis dance on an empty floor, the bedroom scene where Gillis finally gives in to Norma, the moment on the film stage where the spotlight hits her and the final confrontation between Norma and Gillis. In fact, most of this film could be considered worthy of memory. Billy Wilder's excellent direction helped to create a masterpiece, one that will be watching over and over again for years to come. 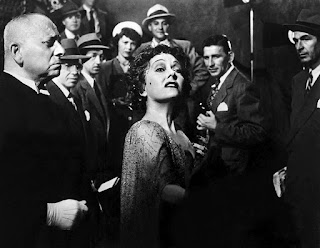