Television Review: Dancing on the Edge

Dancing on the Edge, written and directed by Steven Poliakoff, tells the story of a black jazz band trying to break through in 1930s London with the help of some aristocratic and rich friends. It boasts a splendid cast including Chiwetel Ejiofor as bandleader Louis Lester, Matthew Goode as his journalistic 'discoverer' Stanley, John Goodman as rich eccentric Mr Masterson, Anthony Head as Mr Donaldson and Janet Montgomery as Louis's love interest Sarah. It also has an excellent supporting cast including Jenna-Louise Coleman, Wunmi Mosaku, Mel Smith, Jacqueline Bisset, Sam Hoare and Caroline Quentin. However, for all the excellent names in the cast list, this failed on several points for me.

First, let's start with the positive aspects. The production was sumptuous, the colour and decadence of the Imperial Hotel, where the band first makes a splash, contrasts wonderfully with the organised squalor of Stanley's office and other locations associated with the band before their big break. Visually, Dancing on the Edge is nothing short of beautiful. Alongside the locations there are some gorgeous clothes on view and the series does a relatively good job of bringing 1930s London to life. In addition, there are some excellent characters in this piece, whose intentions you're never quite sure of over the five episodes. Most of these are handled well but a few feel incomplete.

The central problem of this series is a murder which Louis Lester finds himself involved in. He has to work out who his friends are while searching for the truth. However, the viewer is pretty much in on the secret - if you've been paying attention - and the question is always 'how' will it come to a head rather than 'who' or 'why'. This dilutes some tension. Equally, the change in singer Jessie Taylor's (Angel Coulby) from star to diva has no depth to it and rather undermines the scenes that follow it. Much more believable is her back-up singer Carla (Mosaku) who is forced to the fore and copes with it admirably.

There were other issues too. Lady Cremone's (Bisset) arc felt strangely unfulfilled and, as one of the more intriguing characters, I was disappointed by that. The romance between Stanley and Pamela (Joanna Vanderham) seemed artificial and I couldn't buy into it, though they were good characters separately. I was more on board with Louis and Sarah's relationship, though I don't think the racial aspects of that were explored half as much as they could have been, considering the era. That, too, was left on a note that didn't exactly reward the viewer for their commitment. It wasn't the type of ending I had a problem with, but their final few scenes together. Perhaps one of my main gripes, though, was the band itself: I don't think their loyalty to Louis, so integral to the finale, was demonstrated at all sufficiently. Yes, Louis was the leader but the rest of the band were woefully left out of most proceedings. This missed both the opportunity to show their relationship to Louis but, also, to show the band's rise from the perspective of someone a little lower down the food chain. They became almost obsolete through the middle episodes and that was sad in my opinion.

Ultimately, I don't think the ending rewarded viewers for their perseverance. It flicked too quickly from the climax to the aftermath. I would've liked the see the reactions of certain characters as they heard the full story but, instead, it was just shown on the pages of a magazine. We don't even know how much of the story came out, an insult to viewers if ever there was one. Dancing on the Edge was artistically beautiful, yes, but I think it sacrificed a lot in character and plot to get there. However, this wasn't the case for all characters: Chiwetel Ejiofor and Matthew Goode were given the opportunity to shine and took it. They, for me, were most certainly the highlights of this series. 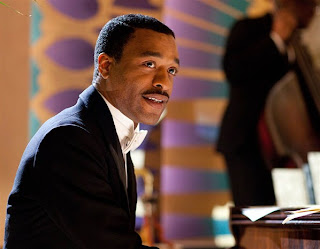