Bad Day at Black Rock is a riveting film which stars Spencer Tracy as John Macreedy, a stranger who gets off the train at Black Rock - the first time the train has stopped there in four years. It's a small town full of people suspicious at his appearance, more so when he starts asking questions about a Japanese farmer who used to live in the area. The main ringleader of the opposition is the intimidating Reno Smith (Robert Ryan), aided by his gang of friends including Hector (Lee Marvin) and Pete Wirth (John Ericson). However, two members of the community are more receptive to Macreedy's mission - Sheriff Horn (Dean Jagger) and Doc Velie (Walter Brennan). But as the search becomes more dangerous will Macreedy make it out of Black Rock alive?

Spencer Tracy gives a phenomenal performance as the one-armed stranger, especially considering he doesn't really talk that much. His mannerisms and quiet nature are central to the film and make for compelling viewing. Equally, the supporting cast are all very good, the most notable being Dean Jagger as the sheriff whose drunken state and nervous disposition contrast well with Tracy's Macreedy. Anne Francis also turns in a decent performance as Liz Wirth, though as the only woman in the cast she feels a bit of an anomaly at times.

There are two things that make this film exception apart from Tracy: the setting and the dialogue. The former is integral to the film, showing the desolation of Black Rock and Macreedy's isolation once he's there with no way of escape but it's used very effectively. One of the most important conversations of the film takes place on the railway track, a symbol about the inevitable progression of the story if ever I saw one. Equally, the dialogue throughout is sharp and rarely redundant. Almost every scene of this film is a work of art that moves the story forwards.

Overall, this is a tense film with some memorable moments, although these are as likely to be the 'quiet' ones as the moments of truth and revelation. 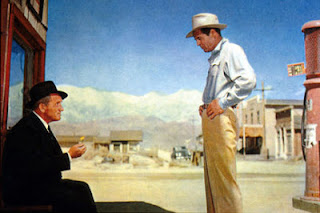 Nicely reviewed. I haven't seen this one for decades but remember it as a classic. My memory is that it's in Cinemascope and black and white. Is that right?

It's not in black and white but it's a very barren landscape, beautifully shot to make it look even more so. It's possibly the bleakness that's stuck in your mind.

I too am a big fan of this film. I think it is one of Spencer Tracy's best roles. Tracy, as he got older, had a way of overpowering the rest of the cast in any film he was in, possibly as he grew more and more to resemble a rock formation.

But in this film, it works very well for him. And really, it's hard to overpower Robert Ryan.

Thanks for the comment, Yvette, and thanks for following.

Still working through Tracy films but from what I've seen the only person who could stand on the level with him was Hepburn, his demeanour does seem to dwarf most actors.

We're linking to your article for Academy Monday at SeminalCinemaOutfit.com

Keep up the good work!