This mini-series focuses on Charmian (Sheridan Smith), the wife of infamous train robber Ronnie Biggs (Daniel Mays). By focusing on Mrs Biggs, the programme gets away with showing the Great Train Robbery and Biggs's dodges around the law as he escapes from prison and ends up eventually in South America. However, while it sometimes seems as though Charmian is simply the veil used to show the adventures of her husband, she is actually a fascinating person in her own right.

Sheridan Smith puts in an excellent performance as Charmian through all her ups and downs. Whilst she is a strong woman, she wobbles occasionally and, even when she doesn't, there is still anxiety there. Smith's portrayal is both sympathetic and uncomplimentary where necessary. Alongside her, Daniel Mays puts in the performance of his career (and I've seen him in a few things) and Adrian Scarborough and Caroline Goodall as Charmian's parents are stellar additions to the cast. However, one aspect of this story which makes it difficult to follow is the scope of it. There are many, many people who flit in and out with the only real mainstays being Charmian and Ronnie. Keeping up with who's who is occasionally difficult, but that's an unfortunate side-effect of telling such a story. One thing that can be said, however, is that the cast are excellent without exception.

The twists within this programme are numerous and the producers make clear that they fabricated or enhanced some scenes for dramatic effect. Nevertheless, the piece holds together very well - any fabrication isn't immediately obvious as it sometimes is in such cases (see my review of the 1941 film Blossoms in the Dust for an example of that). There are some truly moving moments which Smith pulls off beautifully but there are a couple of salacious scenes in the final instalment which, I felt, weren't really necessary and disrupted the overall tone. However, as a piece of entertainment this mini-series certainly works. Some of the jumps in time leave the viewer disorientated for a short time but Charmian is an excellent central character and works to ground the viewer in whatever the current situation is. Would I have liked to see more of her in the gaps between the 'events' depicted? Yes, but that probably wouldn't have been very exciting.

All in all, a good drama series with a stunning central performance from Sheridan Smith. 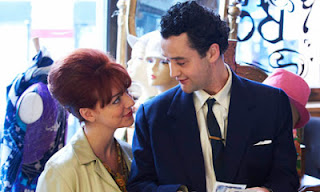