Best of Men, based on real life events, tells the story of a German refugee at the end of WWII who starts work with partially paralysed patients who have basically been left to rot. Dr Ludwig Guttman (Eddie Marsan) gathers enemies around the hospital (and makes himself unpopular with the men) as he begins a new regime to make the men fit for living again in their new circumstances. He realises that there is something missing from their new lives and begins wheelchair sport contests which will eventually lead to the establishing of the Paralympic Games. Amongst the accomplished cast are Rob Brydon as Corporal Wynne Bowen, Niamh Cusack as Sister Edwards and Nigel Lindsay as Mr Heath.

This was supposed to be an inspirational and heart-warming piece of drama and it succeeded. That's not to say that it doesn't examine the vicious after-effects of war because it does. The first few minutes particularly, where paralysed Private William Heath (George MacKay) dreams of how life used to be and then comes back to reality, are especially hard-hitting but there are moments like this throughout. Bowen's character is an interesting one - someone who's very sarcastic but hides behind it to mask how uncertain he is of his future with his wife and children. He's adamant he wants a divorce because he can't live with his family in his disabled body but Guttman won't let him off so easily. Equally, Heath is being swept along by the plans of his father to put him in a residential home but Guttman warns him of what life will be if he agrees to that.

There are comic touches in what could've been a very heavy drama. Guttman becomes embroiled in a war of his own with fellow doctor Dr Cowan (Richard McCabe) who, it transpires, is happy for the injured men to be hidden away and forgotten. Although his relations with his own staff are strained at first, Guttman wins them round and eventually they are as convinced of his methods as he himself is.

I enjoyed this, even if I had difficulty with Marsan's heavy German accent at times. 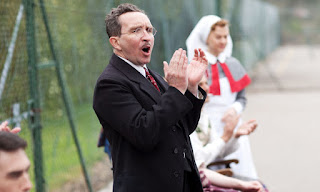