Murder on a Honeymoon is the third in a series about amateur sleuth Hildegarde Withers and is the last of the films to star Edna May Oliver as the protagonist (I previously reviewed Penguin Pool Murder, 1932, here). Miss Withers is travelling to Catalina Island on a small plane with a few other passengers but when it arrives at its destination one passenger doesn't disembark - he's dead. Learning that the dead man was an informant against a gangster, Miss Withers' old sidekick, Inspector Piper (James Gleason), hops on a boat to help her out of what could be a sticky situation. There are plenty of twists and turns and some serious peril for our heroes in this one.

As with Penguin Pool Murder, I thought this was just wonderful. Edna May Oliver and James Gleason bounce off each other perfectly, with the mutual affection between Miss Withers and Inspector Piper coming through in their own grouchy ways. The characterisation of these two is ideal. Piper isn't the brightest and he also tends to rush into things whereas Miss Withers will hold her tongue and watch from a distance. Even so, her beliefs do put the pair of them in danger towards the end of the film and, even before that, she ends up tied up in a closet for getting too close to the truth. Although I had no real fear either character would be killed, there was the sense that some damage could easily be done in the final scenes.

The supporting cast is mostly unremarkable, with Lola Lane as Phyllis La Font probably the best of the bunch. There's a heavy reliance on stereotypes with the island doctor and police officer but since they're incidental characters it doesn't really impede the film much. The focus is on Miss Withers and her friendship with Piper as they solve the murder.

I can't help but think it's a pity this was Oliver's last portrayal of Miss Withers. The potent partnership between her and Gleason could've lasted a long time. 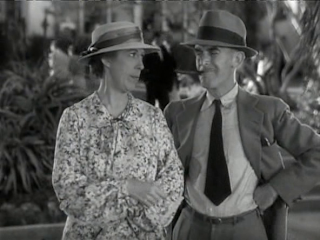 I wish this was available for watching on youtube. Sounds like a hoot. I've read a couple of the books and enjoyed them, but I don't think I've ever seen the films. I also love James Gleason.

I almost wish you hadn't mentioned the books - now I've got the urge to go in search of them!