The Outlaw stars Jack Buetel as Billy the Kid. He arrives in a New Mexico town with a horse stolen from Doc Holliday (Walter Huston). Holliday is intrigued by Billy, taking sides with him over his old friend and new town sheriff, Pat Garrett (Thomas Mitchell). When Billy is injured, Doc takes him to Rio McDonald's (Jane Russell) home to keep him safe. Although romantically involved with Doc, Rio falls for Billy and what follows is a steady build-up of tension between the four main characters.

This film is notably mostly for being the first appearance of Jane Russell on film. It's not a stunning debut but it is a good promise of what's to come. For the most part, Rio is a bland character, won round to loving Billy despite him killing someone she loves. The stronger aspects of her characters shine through before she falls for Billy. Similarly, Jack Buetel is better when paired with Walter Huston instead of Russell.

The interest for me came in the battle between friends Holliday and Garrett. Although Garrett is interested in catching Billy the Kid on a professional level, he also feels betrayed by Holliday siding with Billy against him. This tension sustains the narrative, even though in parts the film drags.

It relies on stereotypes and typical genre tropes and the attempts to make Russell an instant sex symbol are alarming at times. There is one particular close-up of her lips which comes across as more comical than alluring. However, as her first film it remains interesting and the fraught relationship between Holliday and Garrett gives the plot a boost that the Billy the Kid aspect alone could not achieve. 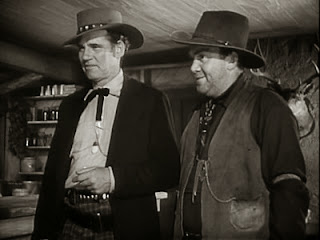