The first thing I should say about this film is that the title is entirely misleading. The 'party girl' of the title is technically Vicki Gaye (Cyd Charisse) but she is something of a reluctant participant, encountering lawyer Tommy Farrell (Robert Taylor) as she attempts to shrug off the unwanted attentions of gangster Louis (John Ireland). Farrell takes her home to her flat where she finds her flatmate has committed suicide. This draws Vicki and Tommy together but very gradually. There is no big unbelievable flourish to their relationship and the film actually stretches over a few years.

The difficulties in the plot come from the fact that Tommy makes a living out of defending gangsters in court. He has a very unique presence in the courtroom, stemming from an accident involving a bridge when he was younger. He limps and is forced to use a stick. This actually adds to his persuasive courtroom persona but meeting Vicki makes him realise that he has to get out of the murky world he represents. He has surgery to assist his walking and, when he returns to Chicago, he tries to break with mob boss Rico (Lee J.Cobb). That, however, doesn't go down well. Farrell has to deal with threats to both him and Vicki as the film builds to its climax.

This is certainly one that defies easy categorisation. It has plenty of drama, including some graphic threats (and more) about acid and the rest of the mob scenes come across very well. Meanwhile, you have Vicki dancing in a nightclub, the studio making the most of having Cyd Charisse in the cast with some lengthy dance sequences. In addition, the romance aspect of the plot is realistic and Taylor and Charisse work well together. I certainly can't fault it as a piece of entertainment, although I did have some reservations. Primarily, Charisse's acting occasionally strayed out of what was necessary for a scene, leading to some cringe-worthy moments. Taylor, however, consistently under-played his role and really became Tommy Farrell for the duration. There were a few unnecessary scenes (Farrell's wife felt like an unnecessary subplot) and, as I said, the title was a bugbear. All that taken into consideration, I did find it very enjoyable, especially the final few action-packed scenes. 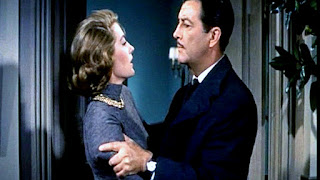 hm.. certainly have to watch that one.. thank you for spotlighting it!